Gingham: Get in line with this year's trend... - Jones Interiors
Contact UsTrade Log-In

The meaning of the word gingham has actually been lost in translation for over 500 years and originates from the Malaysian word genggang, meaning ajar or separate. This is because originally gingham was not a check. In fact, it was a pattern of separate lines – or to you and me – a stripe.

The story is, the original Malaysian name was lost in translation whilst travelling to the Western world in the 18th century. After the First World War, factories in Manchester and the Southern US were latching onto gingham production to revive their struggling economies and boy are we grateful they did! Since then we’ve had a love affair with this versatile fabric and claim it to be a very ‘British’ weave. Although, I wouldn’t repeat that too loudly as Germany, France, Italy, Japan, Cambodia and even some African tribes all claim to have their own history behind the fabric’s origin. 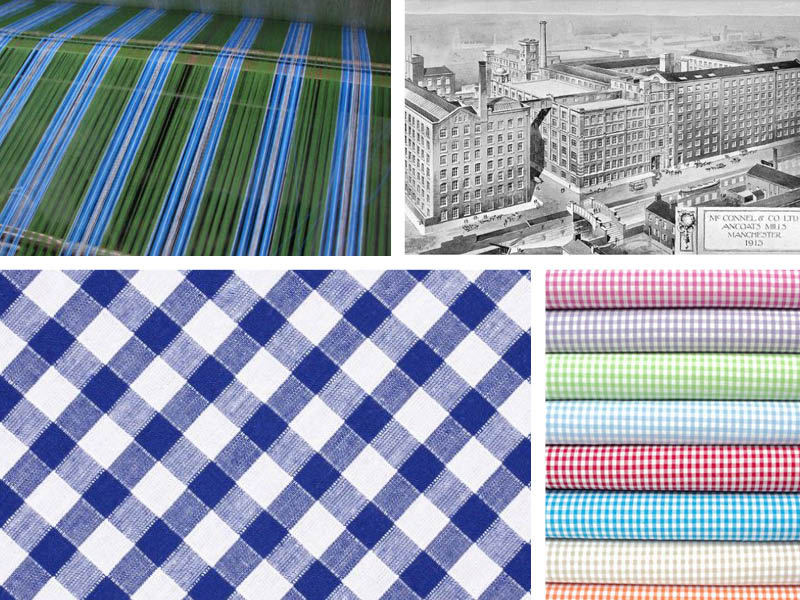 From top left: gingham production, an old Manchester factory in 1913 where gingham was first produced in the UK and then typical gingham in it’s most popular colours.

So, now that we no longer have our lines crossed (pun intended) and have a brief overview of the fabric’s chequered origin (oh stop it now!) let’s delve a bit deeper into the evolution of this
fascinating fabric. We will explore why it has had such a hold of our hearts and appears to be all the rage this summer.

The weave, that is standard for girl’s school uniform worldwide, became a popular choice for men, women and children’s clothing throughout the post war struggles. It’s affordability also made it possible to decorate your home again whilst giving fashion and home décor the opportunity to flourish once again. All this versatility whilst boosting the economy too… what more could you ask for? 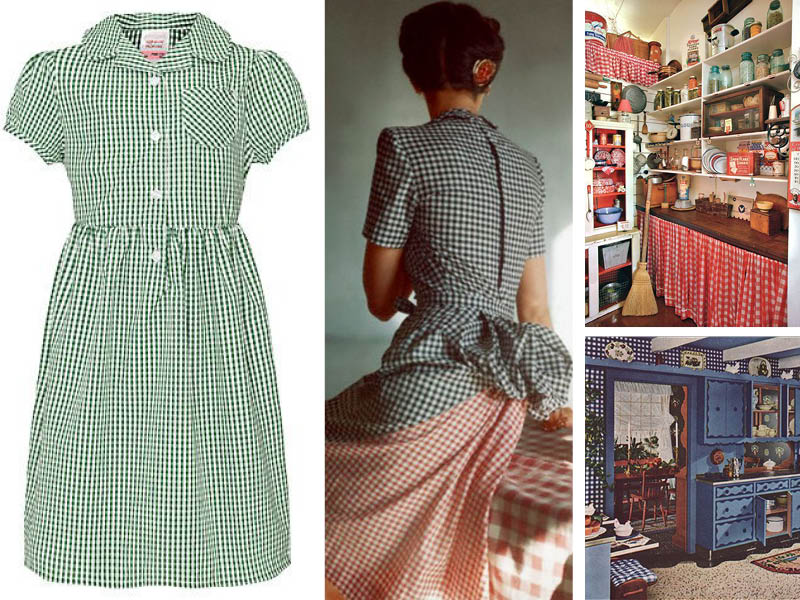 From left: a typical gingham school dress currently sold in John Lewis followed by 1940’s gingham fashion in both clothing and kitchen interiors.

Well, this fabric was about to become more than affordable, economical and patriotic, gingham was about to take centre stage in Hollywood. It all began with Judy Garland’s iconic dress in the Wizard of Oz but when the likes of Marilyn Monroe, Katherine Hepburn and Grace Kelly were wearing it, it was clear gingham was set for stardom. Additionally, Brigitte Bardot got married in a pink gingham wedding dress causing a massive desire for gingham worldwide…France even had a shortage! This powerful celebrity endorsement increased gingham’s glamour, giving it a completely new (maybe even sexy) lease of life. 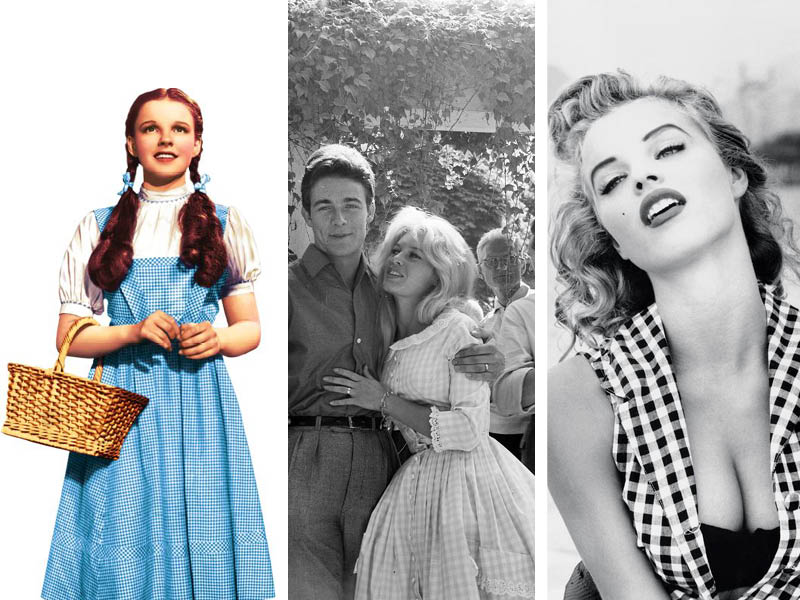 Following this it was no surprise to see it shine through the next few decades. The 50’s were full of Hollywood glamour followed by the Rockabillies while the 60’s Mods sent the likes of Ben Sherman and Fred Perry soaring into the fashion world. The 70’s & 80’s Ska Movement reinvented gingham fitted shirts making them look as good with casual denim as your best suit and trilby hat. Now, in the 21st century, Noel Gallagher’s clothing line ‘Pretty Green’ has revitalized the mod look while House of Holland’s new Spring Summer 2017 Ready-to-Wear collection (a ginghamtastic masterpiece) has just been featured by Vogue…making gingham a ‘must have’ this summer.

From top left: 1950’s Rockabilly style which is still around today followed by typical 1960’s mods and House of Holland’s Spring/Summer 2017 Ready-to-Wear Collection.

So now that we can fill our wardrobes with this attractive weave, let’s see how we can welcome it into our homes too…

Gingham has featured in countless traditional home styles over the years. When interwoven with soft polka dots and stripes, it is the perfect unisex design for nurseries. Subtle gingham compliments farmhouse and coastal cottages bringing a welcoming sense of personality to their interiors. We don’t want this to change, but we would like to show you something. Something new, exciting and fresh, a contemporary twist we think you will really enjoy…

Designers have begun mixing ginghams into modern settings creating a new wave of eclectic style. Gingham on statement furniture or even enlarged on walls and floors really brings a space to life as the contrasting colours creates strong focus in a room. 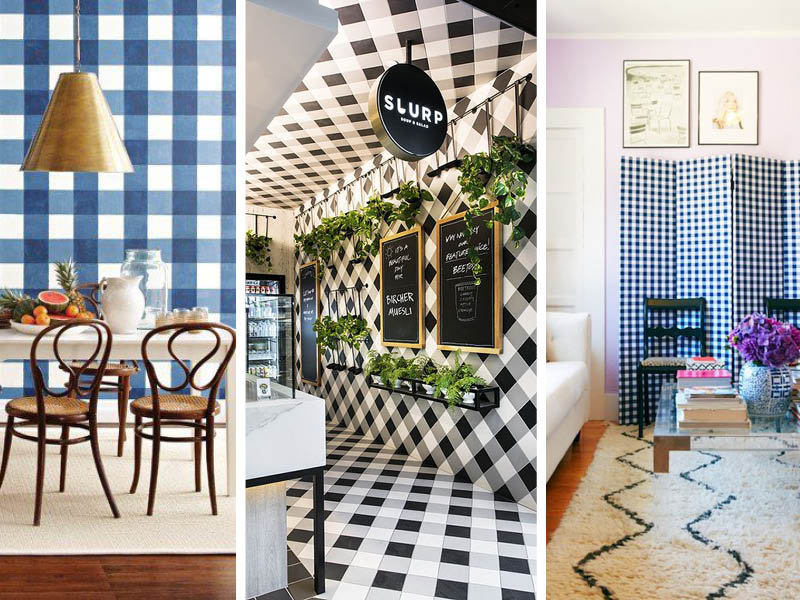 Contemporary use of gingham boosting a room’s creativity and ambience.

Before Henry Holland (of House of Holland) conquered the catwalk this season, he had previously experimented with gingham when he collaborated with Habitat last year. His clever mash up of floral and gingham is a memorable pattern clash and the bold colours and bohemian style show yet another funky side to this versatile fabric.

Henry Holland’s Collaboration with Habitat in 2016 showing a creative mix of gingham and embroidery.

We’re not saying gingham is a trend to be followed. We are saying it is a great pattern for you to unleash your creativity and have a little experiment! The great thing with gingham is you just can’t go wrong. Light shades, room dividers, cushions, curtains, bed covers or even a whole wall. If you fancy bringing this fabulous pattern to your home then checkout our New England fabric collection for our take on this timeless classic. 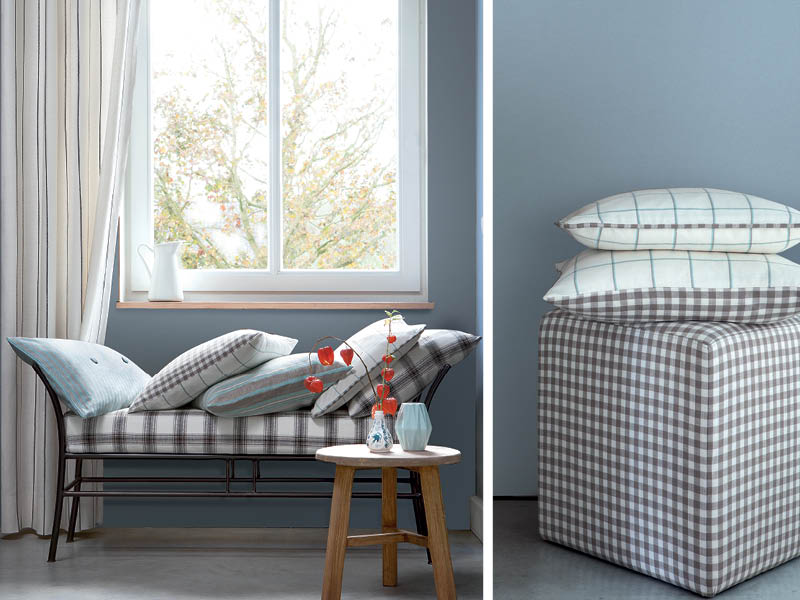 Gingham may have been around a long time but it will never get old. It is constantly reinventing itself to work alongside anything you throw at it. Embrace it, love it and check out our Pinterest page for even more inspiration… don’t be square, get with the gingham!

All images can be found on our Pinterest Board.

Any cookies that may not be particularly necessary for the website to function and is used specifically to collect user personal data via analytics, ads, other embedded contents are termed as non-necessary cookies. It is mandatory to procure user consent prior to running these cookies on your website.